Notes From Underground: The Tashkent Metro

Notes From Underground: The Tashkent Metro

The havoc inflicted on the Uzbek capital forty-four years ago by a devastating earthquake also opened the way for Soviet planners to endow the city with a gem of a transport system. Luke Coffey descends into paradise

On 26 April 1966, Tashkent, the capital of Uzbekistan, was changed forever: a major earthquake measuring 7.5 on the Richter scale destroyed much of the city. An estimated 300,000 people were killed, and the old quarter of the city virtually ceased to exist. In the eyes of the Soviets, this tragedy turned into an opportunity to create a ‘model Soviet city’. The rebuilding effort was carried out by workers from all over the USSR. Within a couple of years, tens of thousands of new homes and buildings were constructed. In fine Soviet fashion, what were once simple two-lane roads became wide, grand boulevards. Parks and squares large enough for military parades also featured heavily in Tashkent’s new urban design. A major part of this transformation was the Metro, the jewel in the crown of the new Tashkent.

Twenty-nine uniquely designed stations spanning 36 km of track offer a stunning example of Soviet architecture at its best. Largely modelled on the Moscow Metro, Tashkent’s underground system is impeccably clean, safe and runs like clockwork. There are three main lines: the Chilanzar Line, opened in 1977; the Uzbekistan Line (1984); and the Yunusabad Line, (2001), for which an additional eight stations are currently being built or planned. The Yunusabad has fewer trains operating, so the average wait between each train outside rush hour can be as long as ten minutes, as opposed to the average of five minutes on the other two lines. Because Tashkent is located in a seismically active zone, the city has been growing outwards instead of upwards. This urban sprawl is the reason why a fourth line, the Sirghali Line, is currently under construction. It will extend the Metro further south, though no realistic timeframe has been given for its completion. 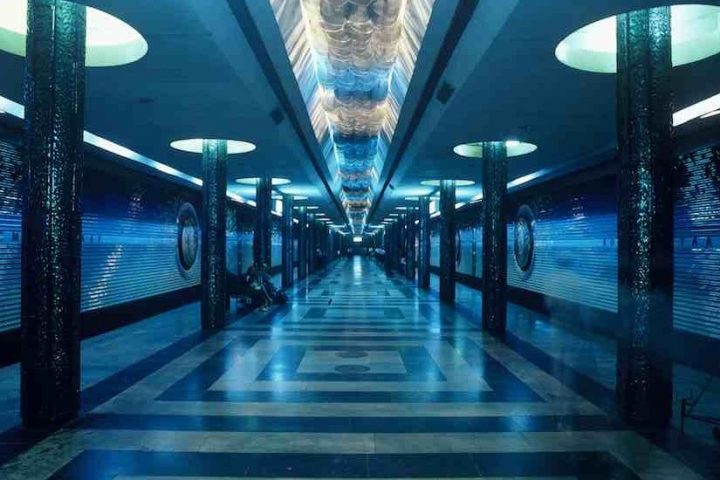 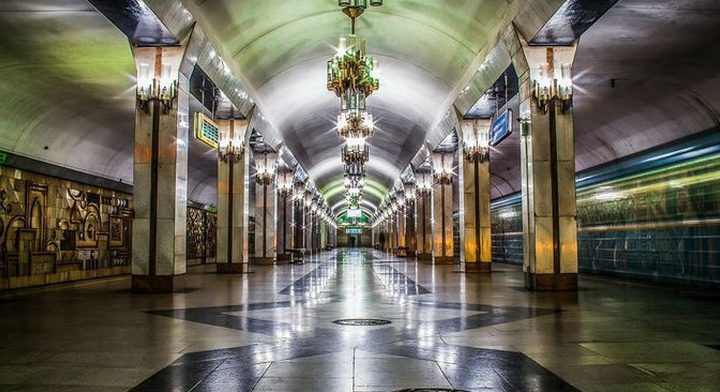 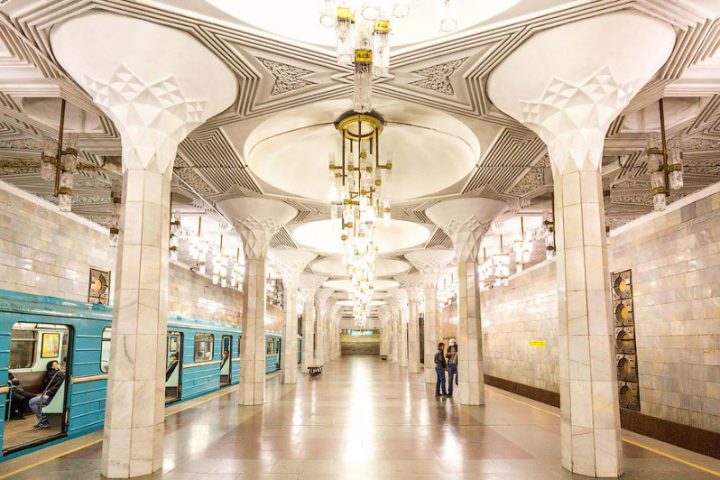 Upon entering a Tashkent Metro station, the warm, stale smell found in almost any underground system in the West quickly dissipates once you have purchased your light-blue plastic token and passed the guard barriers. Wide platforms and high ceilings give the impression, in many of the stations, of being in a light, airy, immaculately clean hall. The ubiquitous policemen patrol every platform, which reassures one’s safety concerns (though foreigners should expect to be asked for identification).

There appears to be no rule as to where to stand or walk on the escalators, as in London and other busy cities around the world. There is, too, something honest about the way each platform has a clock indicating the amount of time that has lapsed since the last train departed, instead of counting down to when the next train is expected. Relative to the city’s size, the Tashkent Metro has the reach and accessibility of the London Underground, the efficiency of the New York Subway, the simplicity of Rome’s Metropolitana and the roomy carriages of the Métro de Paris.

It is a common misconception in Tashkent that its metro system can be used as a nuclear bomb shelter. Only the Yunusabad Line has the required depth and doors to serve as a bomb shelter, and is secure enough to withstand an earthquake of a magnitude of 9.0 on the Richter scale. Ironically, this line opened eleven years after the end of the Cold War, when the need for such shelters had all but disappeared.

Each station’s architecture and décor are unique, centring on a particular theme – usually some proud aspect of Uzbekistan’s people, history or culture. Ming O’rik (‘Thousand Apricots’) station, for example, pays tribute to that popular fruit and its prevalence in Tashkent. Bodomzor station displays ceramic images of chillies and bread, two important staples of Uzbek daily life. The first station to be built, Mustakillik Maydoni (‘Independence Square’), sits across the road from the Senate building. The marble used in its construction comes from the Kizil Kum desert in western Uzbekistan. Numerous chandeliers brighten the platform and the star patterns in the marble floor represent the contribution made to Uzbek history by Ulug Bek, a fifteenth-century astronomer prince and the grandson of Timur.

One stop from Mustakillik Maydoni on the Chilanzar Line is Pakhtakor station, the second to be completed, which displays beautiful mosaics of cotton – the main cash crop and export of Uzbekistan. Dominating the walls are bronze sconce lamps that resemble early nineteenth-century candelabra. Next to Pakhtakor station, on the Uzbekistan Line, is Alisher Navoi station, named after the fifteenth-century Herat-born father of Turkic literature. Its walls are decorated with scenes from this famous poet’s work. Thanks to its domed architecture, Alisher Navoi stays cool even during the height of summer.

Two stops from Alisher Navoi to the south is Kosmonavtlar station, dedicated to Soviet space travel. Images of cosmonauts line the walls, including those of the first human in space, Yuri Gagarin, and the first woman in space, Valentina Tereshkova. The station’s large grey pillars lead up to its dark ceiling, and the clever use of both dim and bright lighting gives it a celestial feel.

One could spend days exploring the Tashkent Metro in detail. The uniqueness of each station is awe-inspiring, and there is a general sense of anticipation when approaching the next stop. It is said that the Metro was a reward for the sacrifices made by Tashkent’s citizens during the 1966 earthquake; for the city’s inhabitants it is a mark of pride, and for the foreign tourist, the object of envy and marvel.