The age of Bukhara city is more than 2500 years and it testifies that Bukhara, as well as Rome and other ancient cities, is a cradle of civilization.

According to a legend Bukhara was found by a Persian Prince Siyavush . After he married Afrosiab’s daughter he constructed a citadel named Ark. Bukhara
In ancient times Bukhara was a part of one of Central Asian regions named Sogda where architectural structure had been developed since the Alexander the Great times. There are several versions of the city name origin: according to one version ‘Bukhara’ means ‘monastery’, other version says – ‘abode of knowledge’.
Located on the Great Silk Road, the city has long been a center of trade with more than 60 caravanserais where merchants from India, China, Iran and other countries had been staying.
The historic center of Bukhara, which contains numerous mosques and madrassahs of XI-XVIIcc, has been listed by UNESCO as a World Heritage Site.

Historical and architectural monuments of Bukhara

Ulugbek’s Madrasah is the only construction in Bukhara in memory of the great astronomer Mirzo Ulugbek. There is a saying carved on the doors of the madrasah: “Aspiration to the knowledge is the duty of each Muslim man and woman”.

Mirzo Ulugbek’s Madrasah has a rectangular shape with a courtyard and the main front entrance decorated with a high portal. The entrance is forked by a cross corridor. There is a library on the second floor. Walls and arches are decorated very simply. The madrasah is decorated with ornament of astral character.

Lyabi-Hauz ensemble (shore of the pool) is a very popular place between the tourists. It is the largest artificial reservoir of medieval Bukhara. It was installed at around 1620 between khanaka and madrasah, constructed by the order of khan’s vizier Nadir Divanbegi. The two new buildings and Kukeldash Madrasah had formed a perfect architectural ensemble with reservoir in the center. The pool is of 42 meters in length, 36 meters in width and about 5 meters in depth.

Kukeldash Madrasah is one more construction of 16th century which relates to the period of Abdullahkhan II ruling. This madrasah is one of the biggest one in Bukhara. It has 160 hudjras situated in two stories on the perimeter of two-ayvaned courtyard.

Trading cupolas of Bukhara consist of three main domes named as “Toki Zargaron” (dome of jewelers), “Toki Sarrafon” (dome of moneychangers), and “Toki Telpak-Furuhson” (dome of fur headwear sellers). Medieval Bukhara was considered to be a big business center receiving merchants from the whole Central Asia, Iran and India, Russia and China. The trading status of Bukhara influenced on the planning and architecture of the city. Central streets played a role of markets, each of which specialized on some special products. In order to make sale more comfortable, domed and multi-arched buildings were constructed on the squares and crossroads. They were named “tok” (arch, dome).

These domes built in the 15th-16th centuries, blocked the crossroads, directing traffic, unloading arterial road and organizing trade processes. Shops and workshops were located inside on the perimeter. Architecturally and functionally Tim of Abdullakhan belongs to these domes. This is large multi-domed trading construction for silk sale. In the center of the Tim there is a big area for sale. Domed gallery is going round on its perimeter.

Gaukushon ensemble is situated to the west from the dome Toki Sarrafon. There are two small madrasahs and architectural ensemble of Gaukushon related to the Sheybanid’s constructions of the 16th century. This is one-storied complex that includes a mosque, small minaret imitating the minaret of Kalon, and the madrasah with domed hudjras.

Khodja Zaynuddin Mosque was used as khanaka, local quarter mosque, and burial place of Sheikh Zaynuddin. Constructors of the mosque took into account the peculiarities of its location inside of the living quarter. So that, in 19th century a hauz covered with stoned outlets was constructed here. The hauz supplied local citizens of the quarter and parishioners with drinking water. Southern façade of the building has a deep niche.

The tomb of Sheikh situated at a raised place inside of the special niche of the western façade faced to the street that is unusual for the burying of the saint and honored person. From the courtyard the mosque is surrounded with columned ayvan which has stalactite capitals and marble bases. The columns which have been changed partly in the 19th century are supporting a typesetting wooden ceiling of the 16th century.

Rich polychromic finish decorates the main domed hall from top to bottom. There is a pool with stony steps and carved stony outlets in the courtyard before the ayvan. 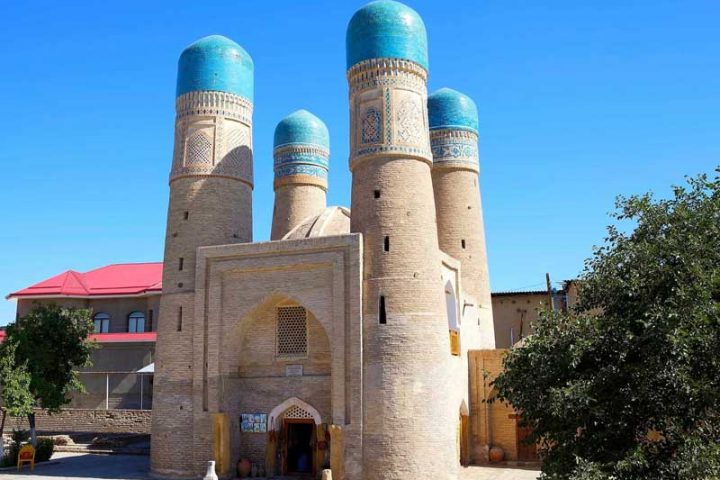 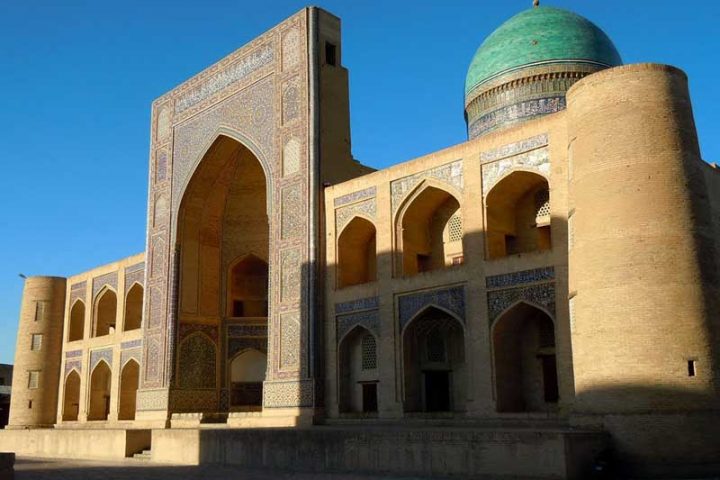 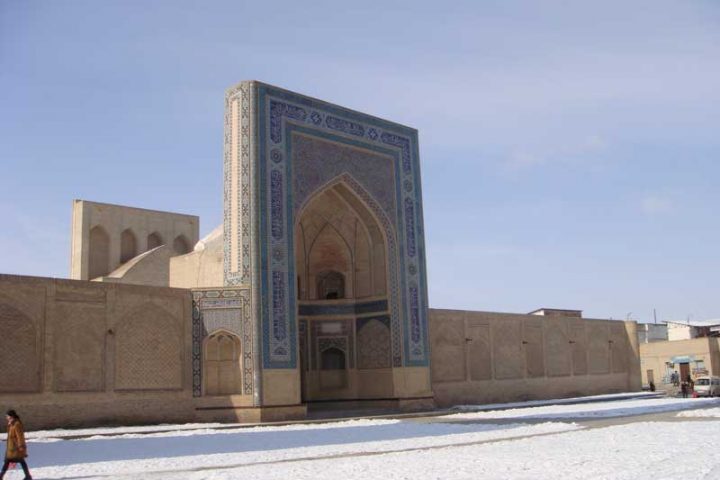 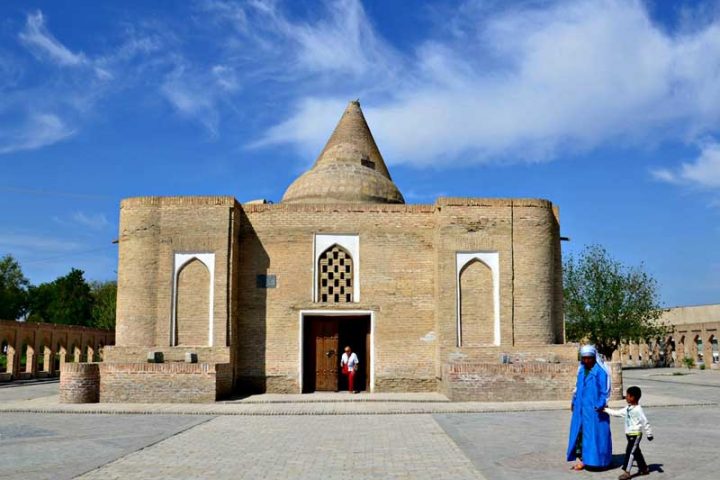 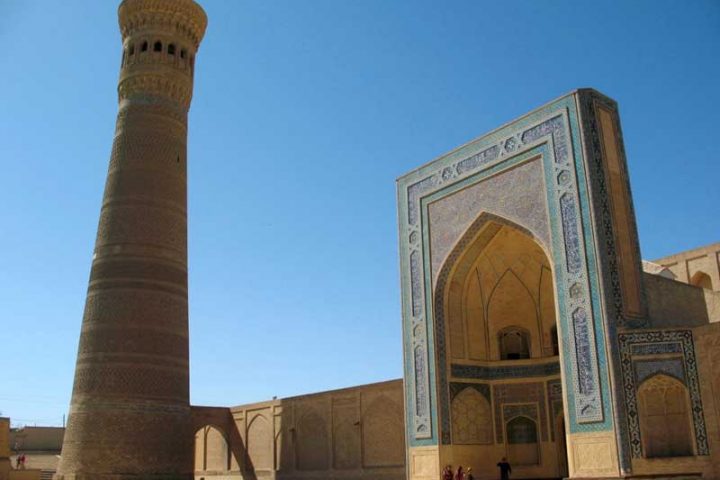 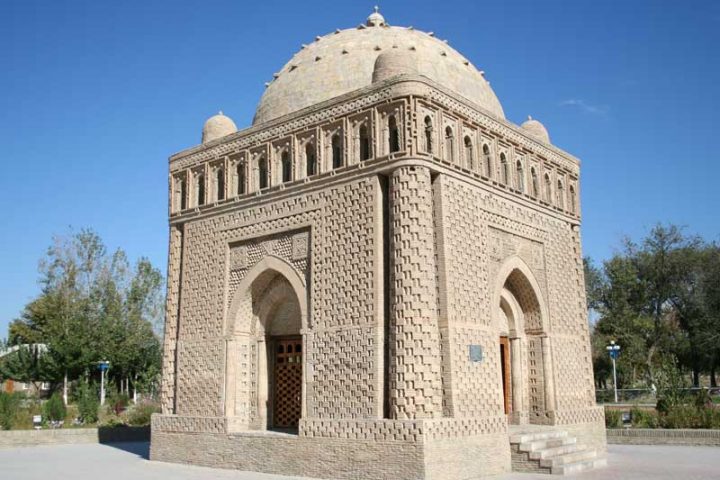 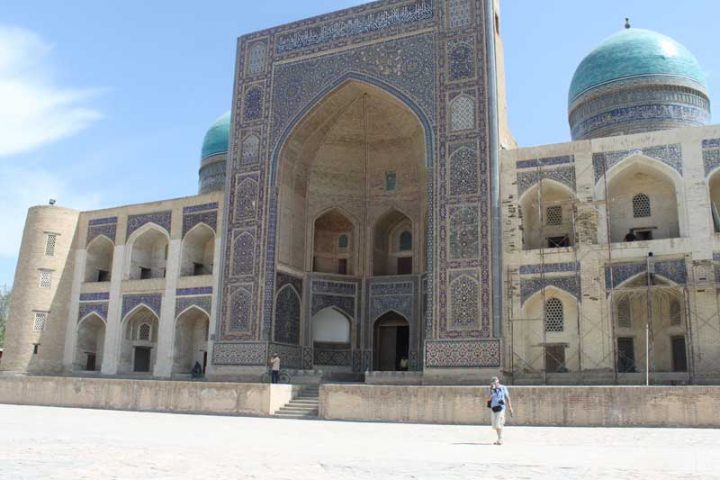 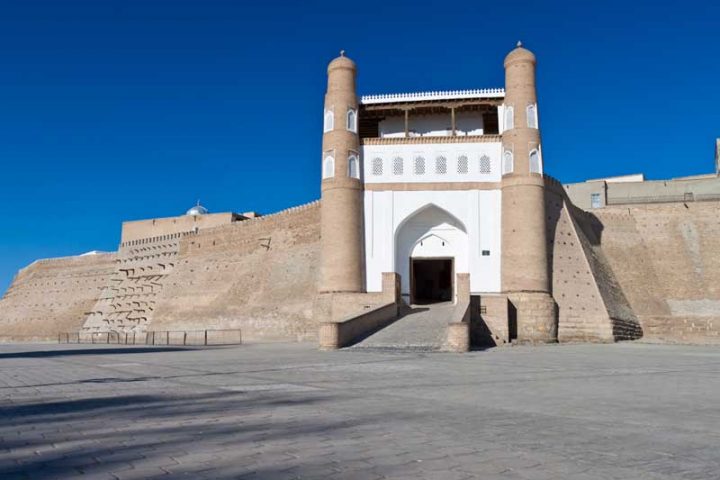